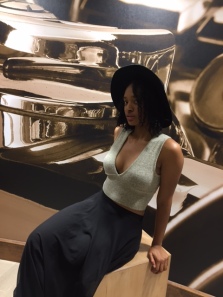 One thing that I can truly appreciate in this life is that you can be whoever you want to be.

I know a lot of people, including myself, who may over think the way one is supposed to act, dress, speak, be. You may see someone do something you have never seen them do and all of a sudden they are changing, faking, fronting and whatever else.

I like to call some of those changes “taking strides.” Kudos to those who are jumping out of their comfort zone. I admire those who once were and now are.

Finding your style may be difficult. You look at all of the models on Instagram and see the same girls with the same bomber jackets paired with a crop top and leggings and wonder if there is anything else left for this generation. You go to Tumblr  and you would have never thought that mom jeans would come back until you scroll past a photo that makes you want to make an instant purchase. But then you second guess yourself. Because you look in the mirror and think you could never pull off something so edgy.

I say who tf cares. The one thing that I admire beyond those who are willing to make changes are those who have the natural confidence to rock whatever they have whether it’s in trend or not. Those are the people I look up to because tbh, those mom jeans really aren’t that cute. *shrugs. It’s the person that is wearing them that makes the difference. People are drawn to those with confidence. Thats why the funniest people seem to have the most friends because they exude something in themselves what many people are afraid to show. Who they are. If you haven’t noticed, so many comedians are willing to crack jokes on themselves and many recognize their own flaws that if someone else calls them out about it, it doesn’t hurt as much.

I say all this to say that I went to Austin this week for my sister’s graduation and I tried something different. Something a little more freeing. I have always said that I wouldn’t wear hats because I thought my head was too big. I did that. I avoided this skirt because I wasn’t as small as I was when I bought it and I didn’t want to worry about the attached skirt underneath rising. I made it work. I have been breaking out like crazy boys and I didn’t really want to take a ton of pictures but..makeup. It may not be what other people are used to but if you look good! Why not??

No more making excuses for yourself people.

Do wtf you want. Take those strides I was talking about. & then rock them.